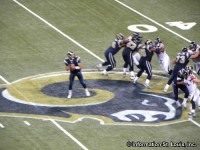 The St. Louis Rams were the National Football League team of St. Louis, Missouri up until January 2016 when they received permission to relocate to LA. While in St. Louis, they played at the Edward Jones Dome in Downtown St. Louis. Thank you for many great seasons! Best of Luck! Good-bye!

*** Coronavirus Update: Please check the website listed on each event to get the most up-to-date information.