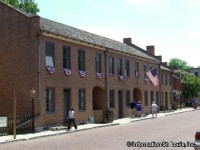 Missouri's first legislators met from 1821 to 1826 in the buildings of the First Missouri State Capitol State Historic Site while the permanent capitol was being built in Jefferson City. Visitors can take a guided tour through the actual restored and furnished rooms where the Missouri state government was created and first practiced. The restored Peck brothers' general store and residence have been furnished as they might have looked in the early 1800s.

Admission is free to the historic site's interpretive center, which offers two floors of exhibits and an orientation show. There is a small admission fee for tours. Many events are held at the State Historic Site and may charge a fee, as well.