Music at the Intersection in Grand Center

Music at the Intersection in Grand Center. Dates: Saturday & Sunday, September 10th & 11th. The Grand Center Arts District will host the music festival "Music at the Intersection." The festival will feature 50+ national, regional and St. Louis artists performing a wide range of music genres - from Hip Hop to Soul and from Jazz to Blues - at four different stages. See website for more info and how to purchase single day or full weekend tickets, VIP tickets are available.

*Artists are subject to change.

Grand Center is an arts district that is home to performing arts groups such as The Black Rep, Dance St. Louis, St. Louis Shakespeare, and Saint Louis Ballet, many venues including the Fabulous Fox, Powell Symphony Hall, the Sheldon Concert Hall and Jazz at the Bistro, all bringing exceptional entertainment to the St. Louis area. Museums, galleries and other educational organizations dot the area and round out this culturally rich district. Grand Center is host to many events throughout the year. Events such a First Night on New Year's Eve, First Fridays of each month, Circus Flora during the summer months, Grand Center Architectural and History Tours on Saturdays and Missouri Style Week in August.
Directions: Grand Center is a four block area, centered around Grand Boulevard, between Lindell Blvd and Delmar Blvd. in the Grand Center Neighborhood of the City of St. Louis. It is located north of Interstate 64/40, just past the Saint Louis University Campus. 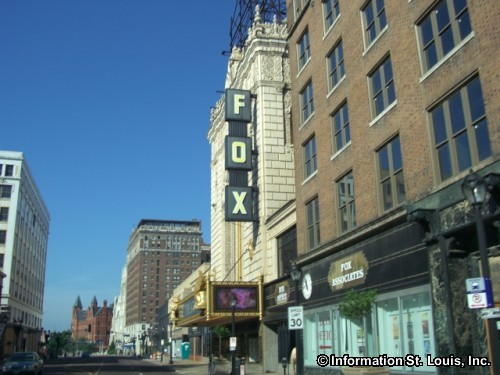