The 2022 St. Louis Mardi Gras presents the Mayor's Mardi Gras Ball which will be held in the beautiful Midway of St. Louis Union Station. The theme for this event will be "The Raging 20's, A Spin on the Roaring 20's" and will features dinner, drinks, entertainment, dancing and more. Doors open at 7pm. The proceeds go to create community grants that have shown to benefit Soulard and Downtown. See the website to purchase tickets.

St. Louis Union Station, a St. Louis Landmark and a National Historic Landmark, was once the largest and busiest passenger rail terminal in the world. Designed by the famous St. Louis architect, Theodore Link, it first opened in 1894 and at the height of train travel, serviced 22 railways. In the 1940's, over 100,000 passengers a day came through the St. Louis Union Station.

St. Louis Union Station is the host to several events throughout the year. Also, during the Christmas season, The Polar Express leaves from Union Station for the ride to the "North Pole"!

Directions: Located in Downtown St. Louis on Market Street. From Interstate 64/40, take the Market Street Exit #39. From westbound I-64, make a right on Market and go one block to Union Station on the right. From eastbound I-64, make a right on 20th Street, go one block and make a left onto Market, Union Station is on the right. 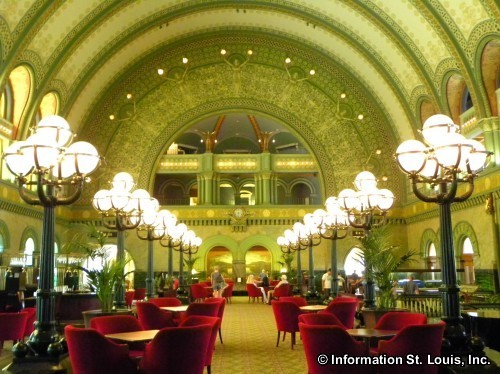